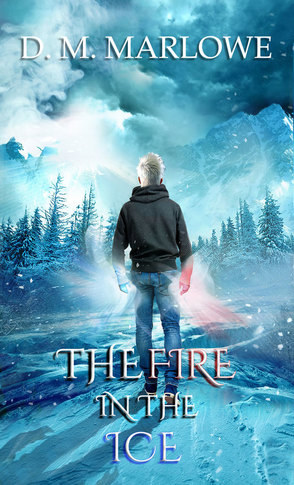 Book Three in the Eye of the Ninja Chronicles
The Fire in the Ice
​Born of spirit, magic and science, Reik was never just a normal scout for Ryu.  He’s left the Ninja village behind, intent on one mission only.  He will do anything to free his mother, even face the powerful ice mage who fathered him.

Time is running out.  War looms, the lines of good and evil are gathering and his father commands incredible magic .  Can remote Reik let down his walls and forge an alliance that will seal his victory?  His mother’s fate—and a key to the larger battle—rests in his reluctant hands.
Excerpt:
So. Not. Right.

Reik perched in a silver fir and stared in dismay.

The location wasn’t the problem.  The Ijirac had given detailed directions.  Reik had been surprised to hear that Runar, the ice mage—also occasionally known as White Shoulders, the Yeti—spent his winters on the high slopes of Mount Rainier, near Seattle.  He’d found the spot easily enough, though.

It looked similar to a thousand other locations above the snow line of the active volcano.  A rocky ridge curved to create a sheltered spot, framed on the other side by a small, frozen expanse of ice.  Literally a glacier, if not on the scale of the larger Nisqually, Emmons and other ice expanses up here on the high slopes.  Together, the ridge and the ice framed an oblong circle of open space.  A stand of mixed evergreens stood to the left of the ice flow and another grew to the right and slightly behind the ridge.  Tucked up inside the curve of the rocks he could see the mouth of a cave.

Snug enough—and not what had sent disappointment and dismay oozing like sludge through his gut.

No—that would be the fault of the figure moving about the snowy space before the cave.

Reik was sure that every kid who grew up without a father dreamed of what his missing parent would look like, once found.  And guaranteed—no kid imagined his dad as ordinary.  Everyone else’s father might be balding with a potbelly, by my dad will be different.
Reik had more reason to think so than most.  He knew damned little about him, but he did know his father was old—an ancient being with command of water and ice.  Reik had pictured him often—sometimes as an aging rock-star type, whippet-thin and strong, with tattoos and big hair like an old-time musician.

Other times he’d imagined a robed, larger-than-life glowing figure, like a boss from a vid-game, with burning eyes and an icy staff.
He’d never imagined this—this boring, stocky, regular-looking guy, carefully building a fire, chanting and fussing over it like an old woman. You’d never fight this guy in a game-ending duel—he would only be cast as a background extra in a vid game—one that dealt with Vikings or some other barbarian horde.

Granted, his hair was . . . interesting.  The sides of his head were shaved.  The thick, white hair on top was long and braided and swept back into a segmented ponytail that reached down his back and was wrapped in multi-colored leather strips.

But that was the only bit of bad-assery about him.  He was short.  Shorter even than Reik.  Neither clean-shaven nor bearded, but a strange, in-between state of bristly grey.  He wore a coat of leather so ragged that the runes and symbols stitched into it looked to be the only things holding it together.  Heavy hide boots, sealskin pants and a mangy looking fur thrown over his shoulders finished out his homeless woodsman look.
​
Not what Reik had pictured when his mother finally confessed that his father was a powerful ice mage.