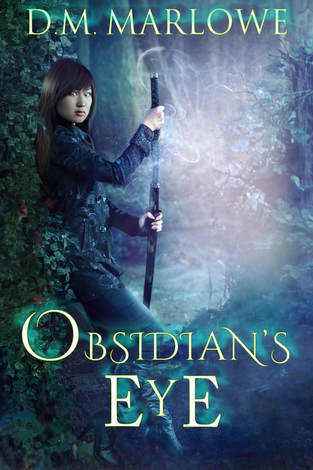 Book Two of the Eye of the Ninja Chronicles
Reviews:
Teenagers of all ages who appreciate a well-written and imaginative fantasy should put this series on the 'To Be Read' list. .  . Be warned--readers entering will find it hard to leave!
--InD'tale Magazine

AIt went so far beyond my wildest dreams. This series is amazing! It reads very cinematically, to where you are seeing all the beautiful fight sequences on a private movie screen in your head rather than on a page. Mei is an amazing heroine and I love seeing her world through the stars in her eyes. (See what I did there?) I can't wait to read more from D.M. Marlowe.
​--NerdGirlOfficial 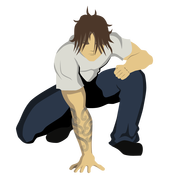 Excerpt:
Slowly, I continued to catalogue our weapons.  Somehow it helped me to restore my equilibrium.  “Sho has his blade,” I recounted out loud.  “My knife.  Hitomi’s nekote.”  I tossed her the set of claws historically worn by female ninja.  “And Ken’s winds, of course,” I said, shooting him a grin.

Just looking at him calmed me further.  His hair was down.  I liked to watch the swing of his just-a-tad-too-long tresses, the curve of his muscled arm.  I remembered the peace that had surrounded us this afternoon at the rocks and reached for a bit of that again.

He didn’t return my smile.  I didn’t let it bother me.  I breathed in the cooling mountain air, rich with scent of growing things and the small rustlings of the forest around us.  Sometimes, I felt like the wood around us was awake and watching.  Not in the same way that I felt the presence of Rialka in Ryu.   Different, more scattered and diffuse, but still there.  Surprisingly, it didn’t spook me.  I listened and felt better, calmer.

But Ken looked unusually serious as he took a seat nearby.  “Mei, come over here?  I have something to show you.”

I raised my brows in question, not wanting to let go of my hard-won tranquility.

He straightened and I could see a long, thin, fabric wrapped bundle in his hand.

The air grew thicker around us.  My heart began to pound.

He unwrapped the object he held with reverence, but I already knew, somehow, what was inside.

I moved then, and felt other eyes on us as I crouched beside him.  From a plain leather scabbard he pulled a blade.  A gorgeous, small sword.
I recognized the workmanship and my heart contracted.  My father had forged this blade.  Set the contrasting blued-steel guard with care.  Crafted the rosewood handle himself.  I sighed when I saw the design carved into the wood—the vine, the scarlet trumpet flower vine that he planted near his forges, because they reminded him of my mother.

“Your father gave it to me.”

He shifted uneasily and spoke with an air of confession.  “I was just a boy.  We all loved to gather and watch him work, on his short visits to Ryu.  He was so strong and talented and we’d heard the stories of his exploits as a scout.  We all worshipped him.”

He swallowed.  “I don’t know why he singled me out, but one day he called me closer.  He knelt down and asked my name—and he gave a knife—that short, sharp throwing knife you’ve seen me use before.”

I nodded, my throat too thick for words.

“I was thrilled.  The other boys were envious, of course, but he’d done the same for a few others, so no one thought too much of it.  But later that night . . .”

“He came to my home.  He sat with my parents and talked for a long while.  And then he called me over.  He presented this blade to me in formal fashion.  I . . . I didn’t know what to do but accept it.  He bade me to keep it safe.  And he made me promise to use it for the good of Ryu.”

Tears welled.  I could see it so clearly in my mind.  My dad’s soot streaked face and startling blue eyes.  The solemnity with which he could imbue a promise or a lesson.

“I’ve carried it with me, ever since.”

His eyes widened.  “A daisho?”

“Yes.”  He spoke of a pairing of a long and short sword that ancient samurais used to wear.

“Then this is the short wakizashi.  Where is the katana?” he asked.

“I don’t know.  I wish I did.”  The long sword had looked very like the one he held, but with a slender, curved, double-edged blade.  “It was the best sword he ever made,” I said longingly.  “I trained with it for several years.”  It had been light and balanced and fit me perfectly.  I still missed it, every time I drew a blade.  Maybe that’s why I preferred a bo staff, these days.

After the demon killed my father, he meant.  “No.”  I shook my head.  “My dad took the blade away.  He said it would be better if I trained with a variety of weapons, and he said that someday that sword would be needed.  He was going to leave it with the person who would see that it would get where it belonged.”  I paused, remembering.  “He didn’t tell me where he was going, but it was a long trip.”

“I wonder where it is?” Ken mused.

I wish I knew.  But I stared at its gorgeous partner in his hand.  “Why didn’t you tell me before, that you had this?”

“I don’t know.  I didn’t want to upset you at first.  You were protective of his memory.  And later, it felt like I’d kept quiet too long.”  He met my gaze.  “But this is it.  The last secret I have.  I wanted you to know, and to also know that everything is open and honest between us.”  His lips pinched.  “And I’ve been thinking that you should have it.”

It felt as if the glade around us was holding its breath.  I stood.  I wanted him to see that I recognized the importance of this moment.  Sho and Hitomi were watching, too.  I could feel the weight of their gazes as I gripped the proffered handle and held the sword before me.

It was so light.  Balanced.  Natural.

And then something happened.  The world lit up, blindingly white and silver for second.  I felt unexpectedly rooted to the ground, and also as if a great wind was blowing up from my feet.  I gasped as a zing of power hit me, a tingle of energy raced along my nerve endings and up my spine, down along my arm—and I almost dropped the blade when it sizzled along my fingertips and into the grip of the sword.  A clear note sounded in my brain and for the briefest moment, the metal blade glowed.

“What was that?” Sho yelped.

The note sounded again, except this time it came from outside of my body.  I looked up and found the Yamaworu standing just past my friends.  Its one eye had gone huge and it’s gaze moved quickly between my face and the shining blade.

And then, just as quickly, the little creature backed away and disappeared.

The glow faded and I thrust the blade back at Ken.

“Your eyes—they glowed.  And then the sword did too,” Hitomi whispered.  “How did you do that, Mei?”

I shook my head and met Ken’s gaze.  He looked as shocked as I felt.

“Listen, thank you for the offer, but I think the wakizashi should stay with you.”  I knew it, rather, down deep in my soul.

I shook my head, knowing I was right.  “I think my father gave it to you for a reason.  You had better keep it.”

Reluctant, he tucked it away again.  He and Sho moved away, muttering, and I bent in close to Hitomi.  “Did you hear the noise the Yamaworu made just now?”

“How many times did you hear it?”

She stared at me like I was losing it.  “Just once.”

I pressed my lips together.  The little creature had echoed the sound that had happened in my mind.

I went to unroll my pack.

Maybe I was
losing it.