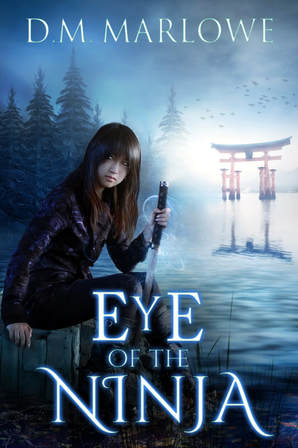 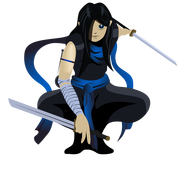 
Mei Barrett has been hiding all of her life.  Raised in solitude by her beloved father, she's been trained to fight, to adapt, to defend.  She couldn't prevent his death, however, when it came at the hands of a mysterious creature straight out of legend.  She could only run--and learn how to hide in plain sight.


For four long years Mei has lived alone on the fringes of a society still recovering from the devastation of quakes and disasters along the infamous Ring of Fire.  Mei's concerns are more immediate, however.  She must hide the despised mutation of her eyes and she must stay one step ahead of the strange wind demon that continues to hunt her.

Detection was inevitable.  But Mei begins to make some discoveries of her own.  For it seems that her old enemy is not the only mythological creature on the loose.  Nor is she the only one fighting them.

​And perhaps her own tragedies are not as far removed from those the world is facing, after all.
Reviews:
Eye of the Ninja was the book I’ve been dying for! I love Japanese folklore and ninjas and this YA did it perfectly!
--NerdGirlSara at nerdgirlofficial.com
​

Fresh plot, great action combining a mix of mystery, action and paranormal elements with with interesting characters, creating a wonderful book that I really enjoyed.  The next one in the series should be out in December and I can’t wait to read it.
--Books in Brogan

The Story is fast-paced, interesting to read . . . characters are well-developed and interesting to get to know.  I highly recommend Eye of the Ninja as a very good read and give it 4.5 stars.  Though this title is classified in the YA genre, any adult who likes to read a new an interesting story would thoroughly enjoy this as well.
--YA Insider

Excerpt:
Outside, the light was fading.  The bus grew crowded as students finished classes and set out for dorms and apartments.  I’d been around the loop twice now.  I got off with a large group on Hillsborough and headed west, toward home.

Carefully, I tested the air.  Not a hint of my pursuer.  I hitched up my pack and set a normal pace.  Remembering what I had been taught, I let my awareness extend to the busy street, the steady flow of students, to the trees and the tops of the buildings above.  All felt as it should.  I tried to ignore the flash of anger and pain that came with that thought.  I’d been here over a year.  Long enough to grow comfortable, long enough for it to start to feel like home.

Gone now, one way or another.

Almost there.  Shadows reached farther, here in the lee of a small hill.  I slipped into them with relief.  Shadows were protectors and allies.

I stopped, suddenly afraid I might need more help than a shadow could give.  Something was off.  Not in the same way as before.  But I felt . . . something.  Eyes watching.

I veered suddenly into the parking lot of a used bookstore.

Something moved in the line of trees at the far edge, right at the spot where I would have walked past.  Something large set the high branches to rustling.  I moved easily, acting as if I didn’t notice.

The bookstore door was locked.  I cursed under my breath before nonchalantly turning to the rack of free books lining the front of the place.  Picking a title, I leaned against the door and opened it.  I eyed the parking lot from beneath my brim, then tossed the book back and chose another—a thick, oversized edition of Sherlock Holmes tales.  Nothing moved out there.  Not a branch or a leaf or a rustle of wind.

I hefted the book and pretended to be absorbed.  Slowly I moved out, head down, nose in the book, ambling west again, but this time taking the alley behind the bookstore’s neighboring houses.  The lane was lined with full-grown trees, providing some cover.  When I hit their sheltering darkness I tucked the book under my arm and took off at a fast, silent run.

Not for long.  Something thumped to the ground, directly in my path.  I skidded to a stop, backpedaling rapidly.

This was not the creature of my nightmares and memories.  It was something different altogether—and yet still entirely unbelievable.

On two feet, broad and heavily muscled, it stood over twice my height.  Its skin was a deep, dark red, it’s nose large and curved over like a beak.  Long, white hair flowed back to meet large, rustling black wings.

It tilted its head in a distinctly avian gesture and peered down at me.  A thin, trilling sound echoed in the alley.  “So small you are, to be the cause of so much trouble.”

I shut my mouth and started to back up.  It shook itself and I realized it was wearing human clothing; a tunic over short breeches and a deep green vest.  A tiny black cap perched upon its head and a green sash draped around the thick neck.  Fluffy white pompoms adorned the sash and trembled as it stepped forward, balancing huge feet on wooden soled, geta sandals.  It peered down at me, staring into my eyes.

I braced my feet and sank down into a crouched, ready position, book still in hand.

It laughed with an abrasive, clacking sound.  “Foolish girl.  Do you not know who I am?  I am Tengu.”  His wings spread, wide and shining ebony.  “We are patrons of the martial arts.  You cannot stand against me.”

It reached for me with a huge, gauntleted hand.  I slammed the book down on it, pushing hard and letting the weight of the book help carry the creature’s hand all the way down to the ground, then I stepped on the book, sprang lightly, pushed off his massive shoulder and launched myself past him.  I hit the ground on a roll and was already running through the trees as a screech of surprised fury rang out.